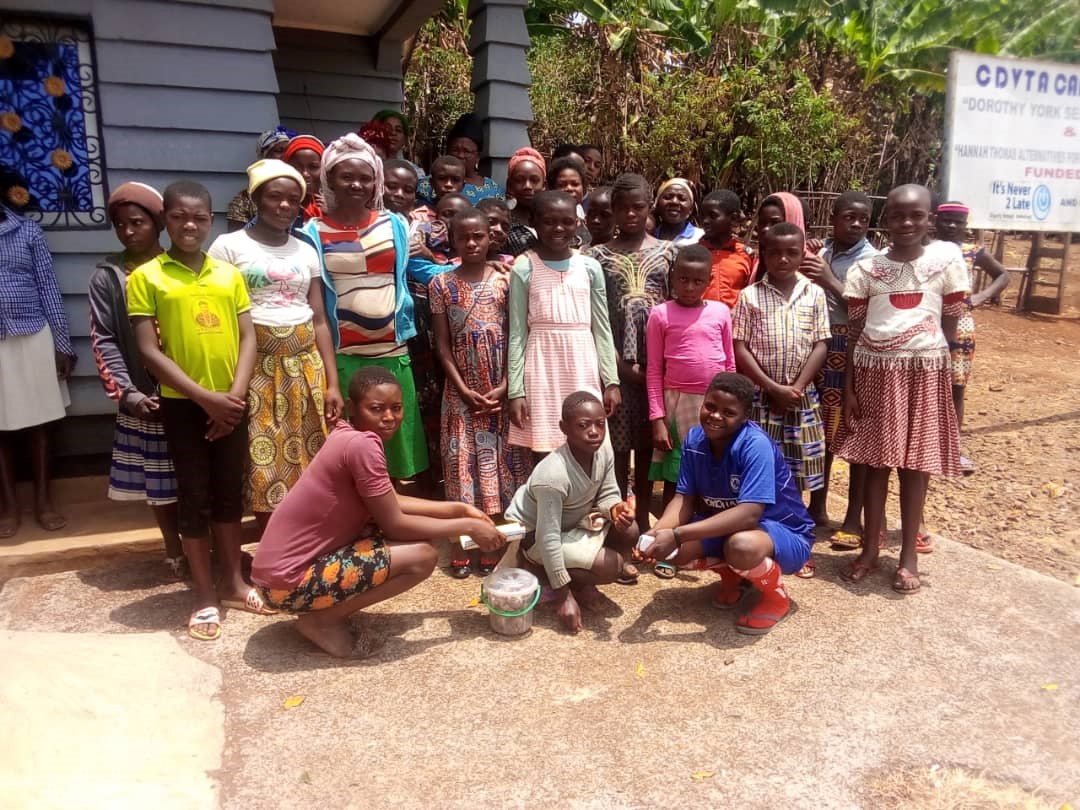 Many more women like Chi Tabitha, (portrayed in the photo with her 2 grandchildren) have been faced with many more problems since the crisis begun as well as the outbreak of Covid-19. She was lucky to have been one of the first beneficiaries to be supported by the Jack York goat scheme for rural women and other CDVTA initiatives.

However, like thousands of other vulnerable women, she has now become an internally displaced person as the socio-economic crisis caused her and her grandchildren to flee from her village due to serious gunfire, the burning of homes and the loss of lives. The outbreak of the Covid-19 pandemic has made it worse as the lockdowns have caused her to lose all means of raising income.

In addition, she has no means of supporting her grandchildren in school especially with protective gear to fight against the spread of Covid-19. Despite supporting many of these women to be economically viable, CDVTA needs more support to sustain thousands more of these vulnerable women who have become displaced due to the current crisis.

Recent data shows that adolescent girls spend significantly more hours on chores compared to their male counterparts. School closures do not just mean that girls are taking on more chores at home, it could also lead to millions more girls dropping out of school before they complete their education, especially girls living in poverty, girls with disabilities or living in rural, isolated locations.

Even before this pandemic, millions of girls were contending with poor quality education – and millions were on course to neither complete their studies nor meet up with the secondary level skills, knowledge and opportunities they need for a productive and fulfilling life. Evidence from past crisis situations show that adolescent girls are at particular risk of dropping out and not returning to school even after the crisis is over. One way of supporting these girls is by creating safe spaces for them to continue school programs with the use of sketches, traditional dances and other learning methods while adapting them to the crisis context.

Currently, many young girls and women who have received support from CDVTA carry out their local activities in the Dorothy York center in Anyajua village which was sponsored by Jack York and IN2L partners. These girls need these safe spaces to carry out their activities especially now where security concerns due to the crisis has made it difficult to do so in other public venues.

Thousands more of these girls in other villages are unable to benefit from this center due to security concerns which cannot permit them to move to this community. CDVTA will need more support to be able to provide safe spaces for such girls in their communities to enable them carry out their other activities. Providing preventive gear to support themselves against the spread of Covid-19 as well as ensuring that they maintain their menstrual hygiene and sanitation practices is important.

Thousands of vulnerable girls are currently in need of such support especially in these disadvantaged rural communities and we need to ensure access to sufficient and affordable water, sanitation, and hygiene services for these girls, women and disabled persons